Where We Go From Here

"Where We Go From Here" is an exhibition of three multi-disciplinary literary technology works by Delta_Ark. (1.) The Beacon was a temporary architectural pavilion set up at Occupy Wall St. (2.) The Dream Catcher was a series of projections set up a squat in Olneyville, RI. And (3.) The Light Atlas was a sequence of projections across San Francisco, in collaboration with the Anti Eviction Mapping Project. All three works examine income inequality, eviction/displacement and technology/media. All three works render testimony and data into poems, projections and text art.

Room used for interviews to gather material for the poems.

from The Dream Catcher 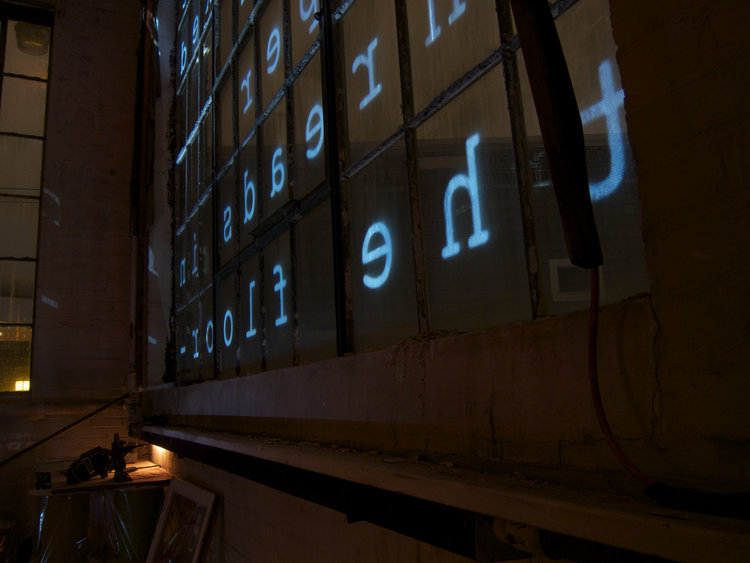 Gif that represents The Beacon project.

V.'s upturned head looking at S. winter-proofing the tent in a crouch, P. filming the first speech S., with upturned hands J.'s haggard face, a skull D. before he lost his house S., every look skeptical the march cutting the city the march, and invisible march the faces in the march the faces of my companions those that left those that stayed those that passed through bottles thrown into the camp curses hurled from cars before it begins, stopping a knife-fight sirens knifing the wind drunks stumbling in drunks stumbling out the rain rushing in the rain draining out the wind rushing in the wind rushing out black-wet boughs green-wet grass blood under M.'s nose the blue-cold eyes of J. the enfolding arms of A. A.'s red beret A., always encouraging A., with her arms open everyone's adopted mother, A. A. sleeps under the bridge everyone looking for A. V. setting up new tents V. getting in new fights V.'s face, hard and dark B.'s long knife in his coat the wind shifting winter black mud and bare trees D.'s large beard and blue eyes a woman cradling a bird a woman cradling a child D.'s blue eyes, then the talk about the wars D.'s blue beard soaked with blood D.'s need is immense repeating each other's words the voices of my companions leaves brushing the tents rain against tent ceilings a thin night raking leaves towered over by monoliths circled by unlit windows J., laughing maniacally force running under S.'s face S., filled with belief S., guiding the assembly S., disappeared as well S., with her buried grief V. pulls down a tarp D., before he lost his mind M. sets up the schedule J. smokes in the booth A. handed me her keys, lost them twice V., filled with regret V., and his woman until she left strangers in the encampment fucking in the tents at night us fucking anarchists thinking to the ringing sirens willing myself to sleep to sleep in a city street blood brought to a slow boil the rest of the city disappears the hum of the generator stirs the clouds the hum of the generator stirs the night's fist the exhalation of the generator the night under the bricks under our feet the moon caught in black flags P. in his wheelchair, wheeling around P. wheeling around with a white mask because it's easy, everyone bullies P. the eyes of A., soft, slightly pained the eyes of A., unyielding the divisions within the camp one argument, then another J., keeping us all together J., keeping it all from falling apart waking up feeling we could live anywhere the trees and leaves the trees and wind a tin cup and lantern our right to gather to recognize strangers rain on wet bark a wet stone on bricks forming up against a brutal element the nation's pulse running under this stupid park the collective threat we threaten each other sirens circling the park like two birds on fire black mud where there used to be grass black flags waving in the air all my friends, wrapped in black flags a small set of provisions a cup of hot coffee and a plate of free food the wind brushing the trees and earth leaves that shift winter speech that shifts winter black-sky stars the drunks walk in S. says it's unsafe lanterns in tents footsteps of strangers six blankets security detail a hand in a hand shook a woman's hair in the wind a woman's face, then the wind A.'s sharp-cutting cough rain on the tops of tarps a bodylike line of light one proposal, then another camaraderie, then intrigue to see the slow unbearable separation from the the city to feel your thinking twisted to the group's purpose to have no separation from the earth to be burned out, to hate it to miss it, to need to be there to know you're needed by the suffering to be unable to rid oneself of the suffering neighborhoods of tents and lights neighborhoods of light and lanterns a liar trying to steal my equipment a liar and his corroded teeth lanterns swinging in the wind lanterns light jokes on fire lanterns in the assembly, lighters, lights lanterns in our hands even when they're not in our minds lanterns in our minds even when they're not in our hands sitting under the tree singing, E. E., playing guitar E., stoic and unafraid E., we acknowledge each other a face parting fallen clouds fear of baton, boot, brute force the threat of the rubber bullet the threat of the gas canister always the threat of the boot in the night always the threat of the incoming threat always the threat of the incoming rock always the threat, irrelevance the soup people brought the bread people baked staying because its believed to be necessary losing people every day, trying to hold out to be a symbol in the field of living-symbols to be a body to sacrifice to brute force to feel afraid for the first time to be obsessed, unable to let go to feel cold, hunger, anger, threat to meet resistance to meet in the field of living symbols living symbols walking over the mud to be idiots empty tents snow D. hands out food to strangers needing to get away, needing to be there J., knowing he'll get his proposal through P.'s acidic question-jokes J., somehow never cold A., raising her hands J., shaking his head missing S. unbearably S., facilitating the assembly S., with her hands in the air S., with her face in her hands standing in a circle, discussing security a man dropped off a bag of food, then left the air against my ear leaves under my pillow a bird flies over the camp air coming out of our mouths like ghosts

Delta_Ark developed The Beacon as an on-site installation for Occupy Providence. During Delta_Ark’s numerous visits to the encampment, Delta_Ark noticed that passers-by continued to remark that they did not understand why the protesters were there. The movement was not a single-issue movement, like ‘end the Vietnam war’; the movement highlighted many of the ways in which an oligarchic faction of the country (the ‘1%’) were gaming the political and economic system. Some protesters were protesting because they had been foreclosed on, others because their health insurance had refused to reimburse them and others still because of crippling student debt. There were many reasons people were occupying; you could see how this could be confusing for someone walking by the encampment for the first time, looking at all the different signs and stations. To remedy this problem, Delta Ark created a communication system that allowed protesters to communicate their reasons for being at the encampment, one clear reason at a time. 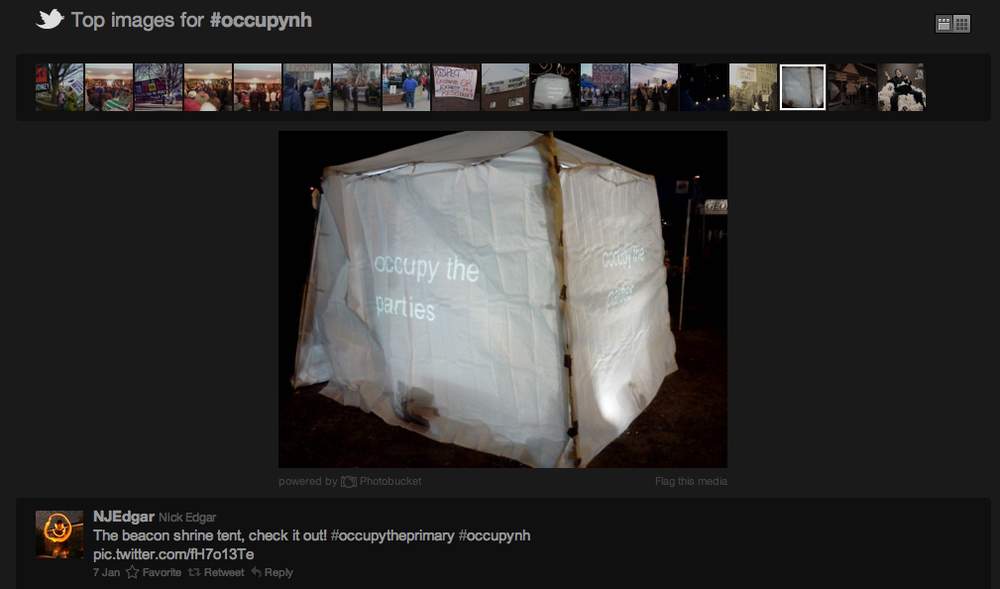 Delta_Ark
Where We Go From Here 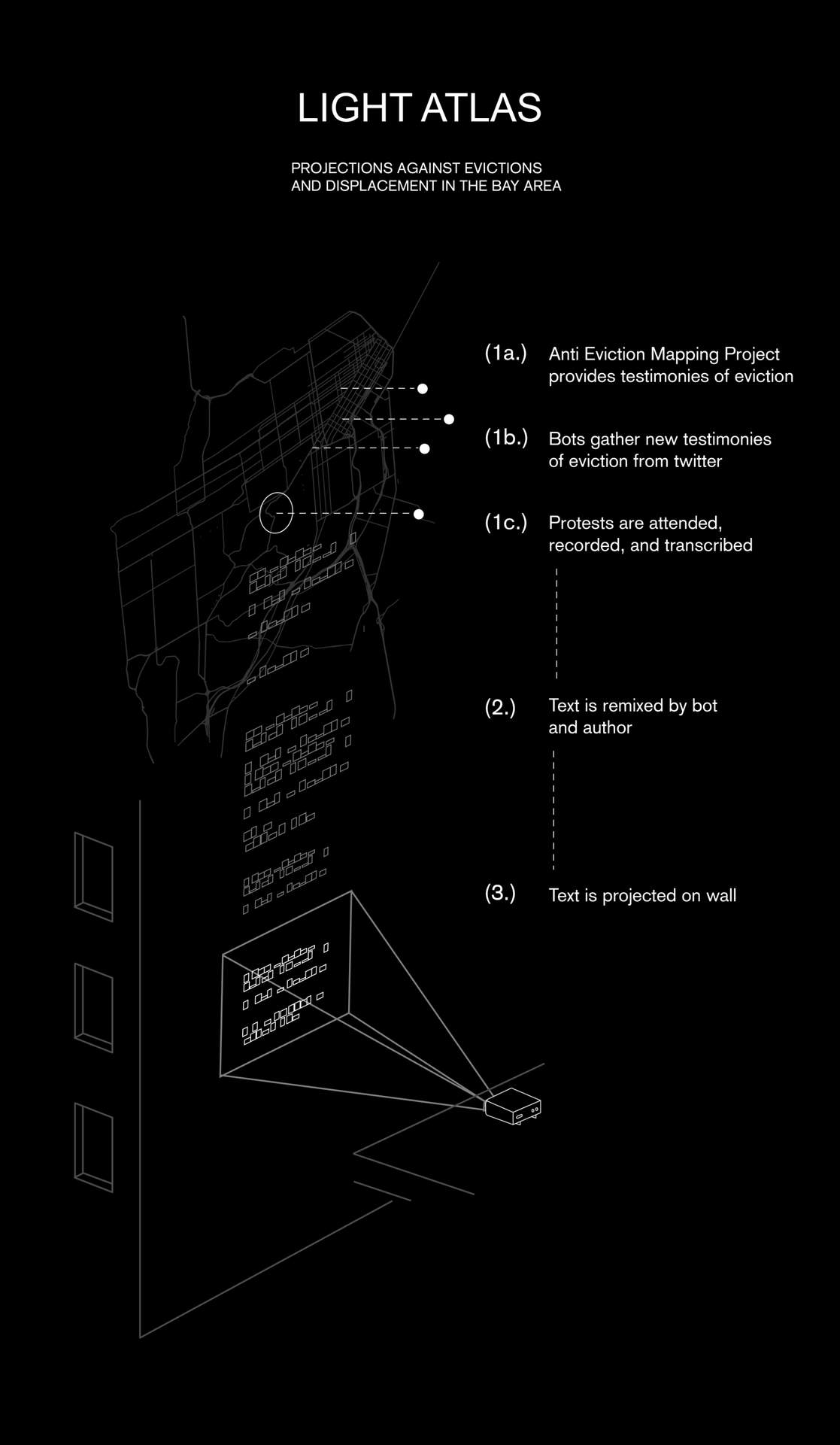 Consider Freetown Christiania. Consider Kowloon Walled City. Or Slab City. Consider what these kinds of spaces add to the life of the city. And the new forms of relationships they enable. Do we try to demolish them? Try to incorporate them in some way? Regulate them? Leave them to be? Do we evict them? What are we losing when we lose these spaces? Could there not be some more enlightened form of governance at the level of the city that allows them to be, while also checking in? We don’t want another Ghost Ship (there’s a history of fires in places like these), but we don’t want a sanitized boring city, either. Squatter’s rights are important. As are, probably even more importantly, the ability to build Social Centers, the kind they have in Europe. After Occupy, a group of occupiers set up the Omni Commons, in Oakland; a permanent collective of collectives. Maybe this points the way, and maybe it also points the way for internet based/initiated movements to maintain a long-term presence? 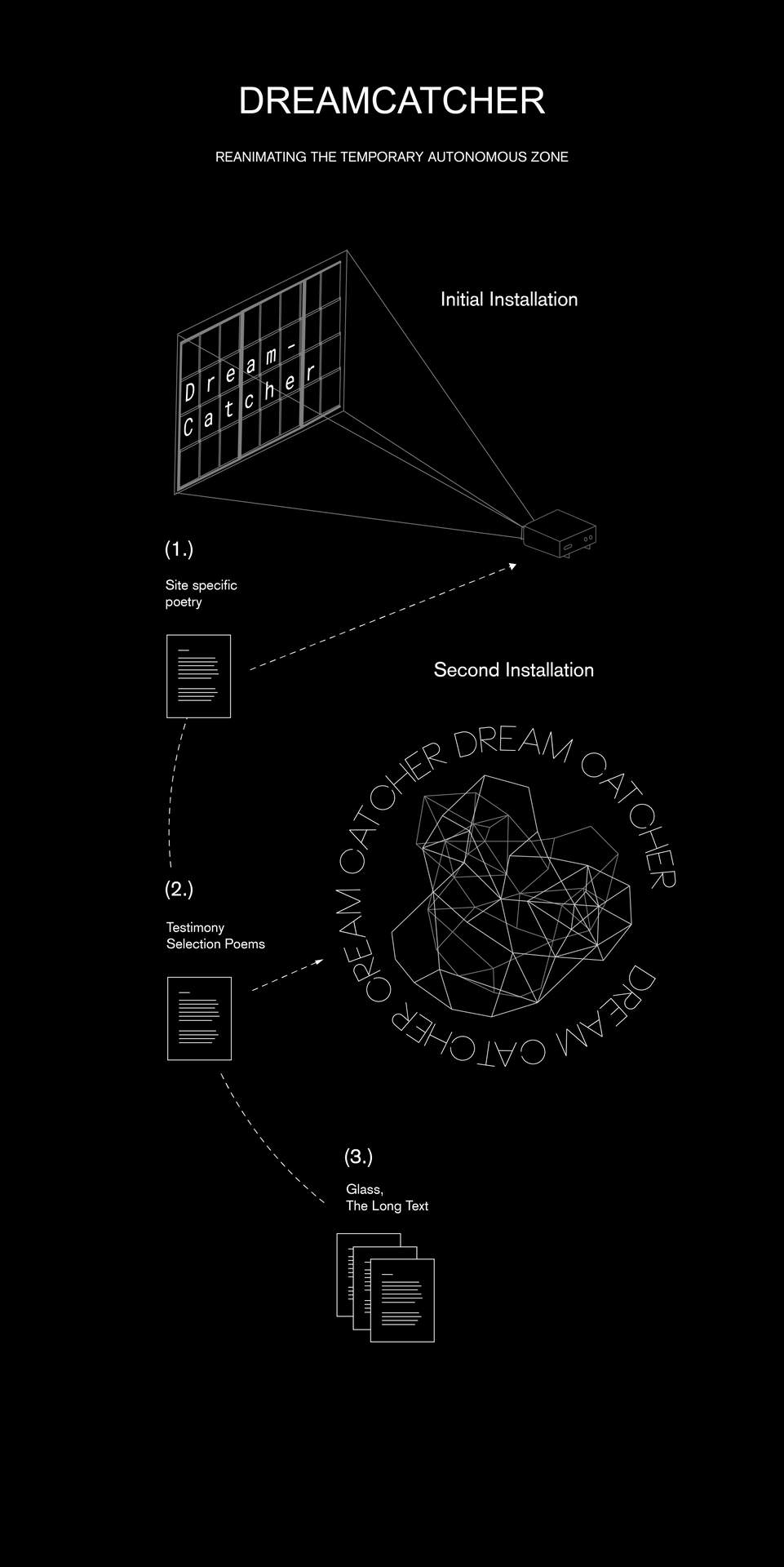 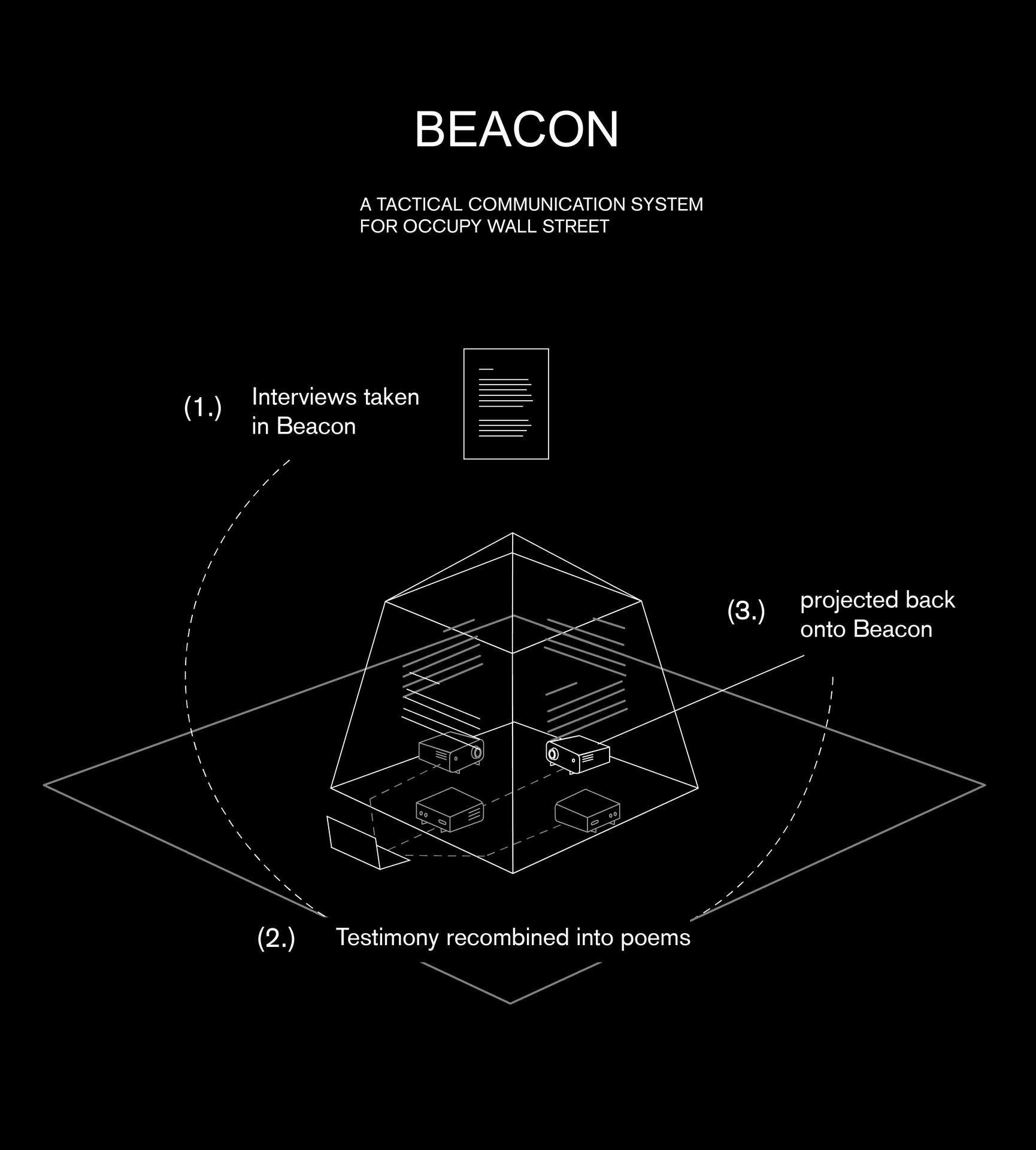